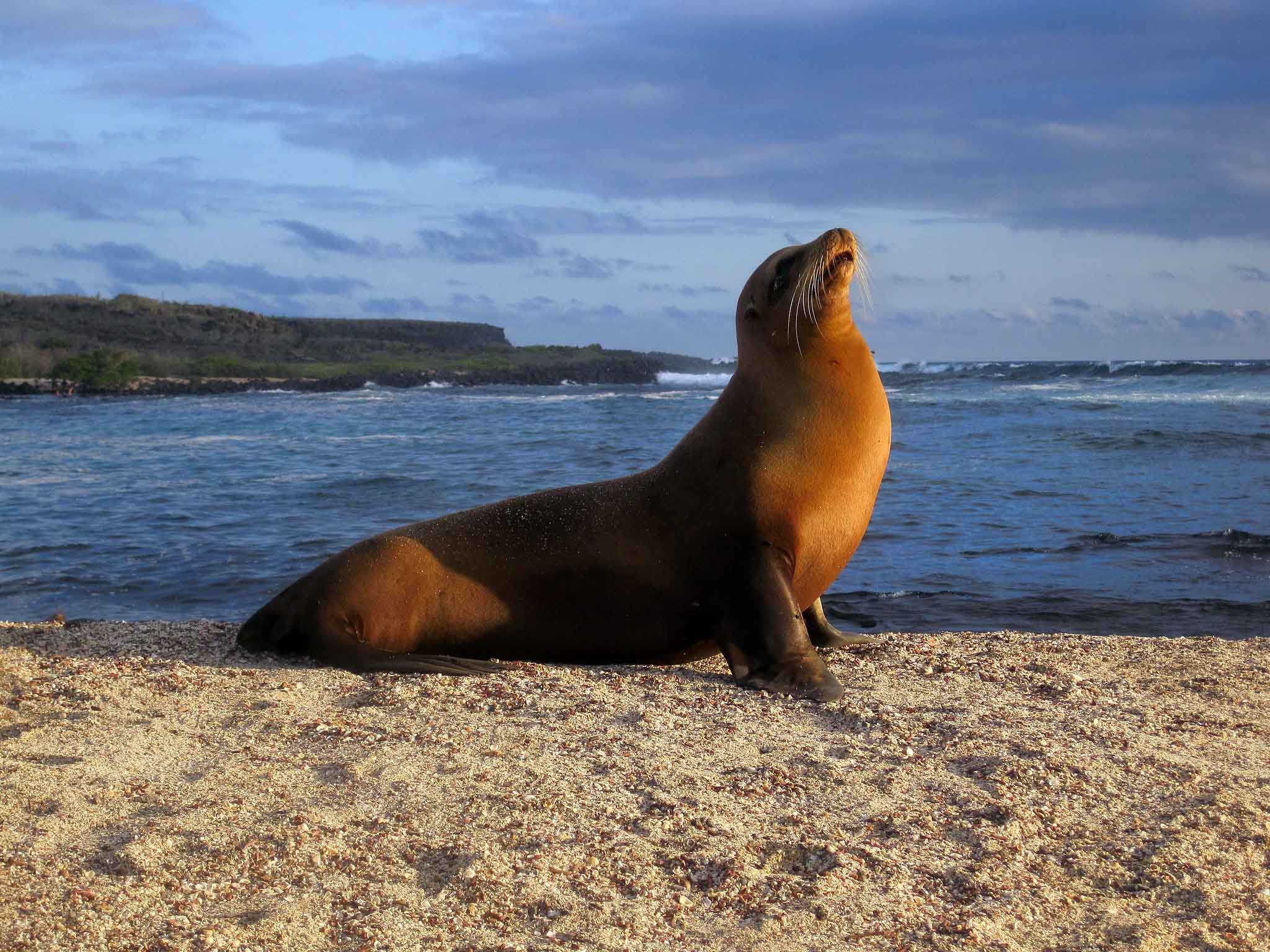 Morning: Arrival to the airport in Baltra, reception by the cruise guide and transfer to the yacht.
Afternoon: Lunch service and navigation to Seymour Island, North of Baltra.
Dry landing. Nature walk* in North Seymour.
*The trail is approximately 2 km (1.25 miles) in length crossing the inland of the island and exploring the rocky coast. Along the way the trail passes colonies of Blue-Footed Boobies and Magnificent Frigatebirds. The Magnificent Frigatebird, a large black bird with a long wingspan, and a hooked beak, is extremely fast and has excellent vision. Frigatebirds are known for the large red pouch on their necks. Boobies and Frigates share an interesting relationship. Sharing the same nesting area on North Seymour Blue-Footed Boobies nest on the ground making their nests from the twigs of the Palo Santos Trees, while the Magnificent Frigatebird nests just above them in the saltbushes.
Evening: Guide briefing. Welcome cocktail. Dinner service and navigation to San Cristobal Island.

Morning: Breakfast service. Dry landing. Nature walk and more wildlife watching. Deep water snorkeling.
*One of the best spots for snorkeling, Kicker Rock or Leon Dormido is an amazing rock formation near San Cristobal Island.This amazing landmark located about an hour and a half to the north east of Puerto Baquerizo Moreno, Kicker Rock / Leon Dormido is a remnant of a vertical tuff cone formation, rising almost 153 meters (500 feet) from the ocean.The erosion has given the rock its characteristic shape, which some see as a shoe, hence the name Kicker Rock. Others see it as a sleeping sea lion or Leon Dormido in Spanish.While we snorkel around Kicker Rock we can spot sea turtles, marine iguanas, rays, Galapagos sharks, tropical fish and if luck is on our side we can even see hammerhead sharks. Besides enjoying the underwater view, we can usually see blue-footed boobies, masked boobies and frigatebirds on the cliffs as well as sea lions along the shore.This famous snorkel tour also goes to one beach that may be Puerto Grande, Cerro Brujo or Manglecito. These alternatives vary depending on the departure day of this Galapagos tour.
*Lobos Island, as its name suggests is famous for its population of sea lions and fur sea lions. You will also encounter nesting grounds for the great Frigatebird and a small number of blue footed boobies.  Breeding center, where will be explained, in a simple manner, the natural phenomena that created the Galapagos Islands. That is the geology and the series of natural processes, such as volcanic eruption and marine current locations that have led to the amazing islands that you are now visiting.
Afternoon:Lunch service and navigation to Cerro Brujo*. Panga boat exploration rides. Wet landing. Nature walk*. Deep water snorkeling.
*One of the first sites visited by Charles Darwin, Cerro Brujo is a beautiful white sand beach where Brown Pelicans, Blue‐Footed Boobies, sea lions, and marine iguanas are all found. An onshore version of nearby Kicker Rock, Cerro Brujo is a very striking, eroded tuff cone.
There is no landing at Kicker Rock. Also known as León Dormido these rocks are located off the coast of San Cristobal. It is the remains of a lava cone eroded by the sea, the two vertical rocks rising 500 feet from the ocean form a small channel that is navigable by small boats. This natural monument has become a favorite sight for cruises due to the many Tropicbirds, Frigates and Boobies that fill the surrounding air. Beneath the sea the nearly crystal waters offer a brilliant show of colorful tropical fish and invertebrates.
Evening:Guide briefing. Dinner service and navigation to Espanola Island

Morning: Breakfast service. Dry landing. Nature walk on Espanola Island Suarez Point*.
*Osborn Islet is located to the southeast of Gardner Bay, near Española Island. Since landing is not allowed on this site, the visit consists of a tranquil panga ride that will allow us to enjoy the panoramic views and the many species that inhabit the place.
The islet was named after Henry Fairfield Osborn, a true lover of nature and animal species. William Beebe worked for him and named the islet after traveling to discover Galapagos.
There are many different schools of fish and other animal species, such as parrotfish, sea lions, butterfly fish, corals, green pencil urchins and many other colorful fish. This site is also great for snorkeling and swimming around the abundant marine life, as its waters are very calm.
*Gardner Bay is a 45‐minute boat ride from Suarez Point. It has a white sand beach and there is a small colony of sea lions. The possibilities for swimming or scuba diving are excellent here. Visitors find migrant, resident, and endemic wildlife including brightly colored Marine Iguanas, Española Lava Lizards, Hood Mockingbirds, Swallow Tailed Gulls, Blue Footed and Masked Boobies, Galapagos Hawks, a selection of Finch, and the Waved Albatross. Snorkel and go on a panga ride at Gardner Islet, and at Osborn Islet snorkel once more.

Afternoon: Lunch service. Panga boat exploration rides to Gardner Bay. Wet landing. Gardner Islet, Osborn Islet. Nature walk. Deep water snorkeling. Swimming.
*Suarez point is located on the western tip of Española and it offers great wildlife viewing of such species as Sea Lions, Sea Birds and the largest Marine Iguanas of Galapagos. This is one of the best sites in the Galapagos. The amount of wildlife is overwhelming. Along the beach there are many Sea Lions and large, colorful Lava Lizards and Marine Iguanas. As you follow the trail to the cliff's edge Masked Boobies can be found nesting among the rock formations. After a short walk down to a beach and back up the other side Blue‐Footed Boobies are seen nesting just off the trail.

Morning: Breakfast service. Visit to Floreana Island: Cormorant Point, Champion Islet, Baroness Viewpoint. Wet landing. Nature walk*. Possible activities: shallow water snorkeling, kayaking, panga boat exploration rides.
*The visit to Cormorant Point offers two contrasting beaches. Arriving on shore you will encounter a green sand beach (the green sand is caused by the olivine crystals derived silicates or magnesium and iron). From here you will follow the trail leading to a lagoon where Pink Flamingoes and other shore birds can be seen in the distance making their home. If you look closely at the mud of this lagoon, there appears to be 'cracks' in the mud. These cracks are not caused from dryness but are actual flamingo footpaths. This is also a good spot for seeing Large‐Billed Flycatchers, Small‐Ground Finches, Medium‐Ground Finches or Cactus Finches. The walk continues to another beach on the other side made of fine white sand particles known as "Flour Beach". In the waters Ghost Crabs and Rays can be seen swimming. Time and weather permitting you may even go for a swim or a snorkel. Other activities include a panga ride to Champion Point and kayaking at Baroness Viewpoint.
Afternoon:Lunch service. Panga boat ride to Post Office Bay*. Wet landing. Nature walk**. Snorkeling from the beach.
*In 1793 British whalers established the Post Office Barrel to send letters to and from England. This tradition has continued over the years, and even today visitors may drop off and pick up letters, without stamps, to be carried to far destinations. This is one of the few visitor sites that is visited for its human history. Whaling Captain James Colnett established the wooden post barrel in the early 1793. At the time whaling was a big industry, ships were typically gone for 2 years at a time. The Galapagos Islands were a frequent stop for these ships. Outbound ships would drop off letters after rounding the cape and the ships returning home would mail them. Over the years thousands of ships have stopped to send and receive mail at Post Office Bay. Many have posted a sign of driftwood or other materials memorializing their visit. This is the only area in the Galapagos were graffiti is still acceptable.
**Arriving at Post Office Bay you will land on a brown sand beach, passing the sea lions lying in the sun. At the post barrel the guide will pull a handful of letters for the group. Continuing the tradition, the letters are brought home with the traveler and then mailed to the addressee. Visitors also have the opportunity to send letters of their own. There are also the remains of a Norwegian Fishing Village a commercial fishing operation established in 1926 and abandoned a couple of years later. The group of Norwegians arrived with dreams of riches started a fishing and canning operation on $900 each.
Mirador de la Baronessa The tough Galapagos life and a few misfortunes had them abandon their dreams. This site is especially attractive because aside from its impressive scenic beauty, it has a history. It is known by letters that Baroness Eloisa von Wagner (referring to “The Galapagos Affair” by John Treherne) loved this place, where she spent several hours where she could acquire knowledge of vessels approaching the island. Within walking distance (30 m) are the ruins of what is known as the House of the Baroness.
Time and weather permitting you may have the opportunity to snorkel again from the beach.
Evening:  Guide briefing. Dinner service and navigation to Santa Cruz

Morning: Breakfast service. Visit to Santa Cruz Highlands*. Dry landing.
Visit to the private estate. This reserve offers you one of the best possibilities to see the huge turtles of Santa Cruz Island in their natural habitat. You can observe them from very close.
Check out and airport departure at 8 AM. 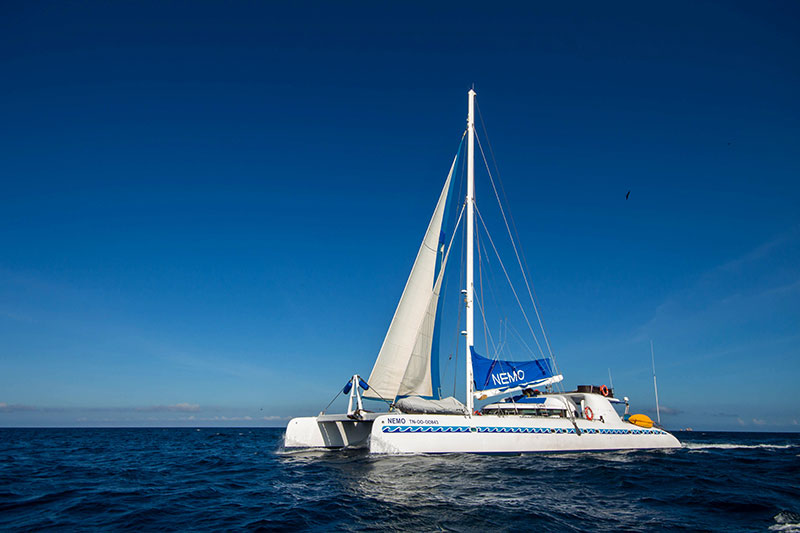