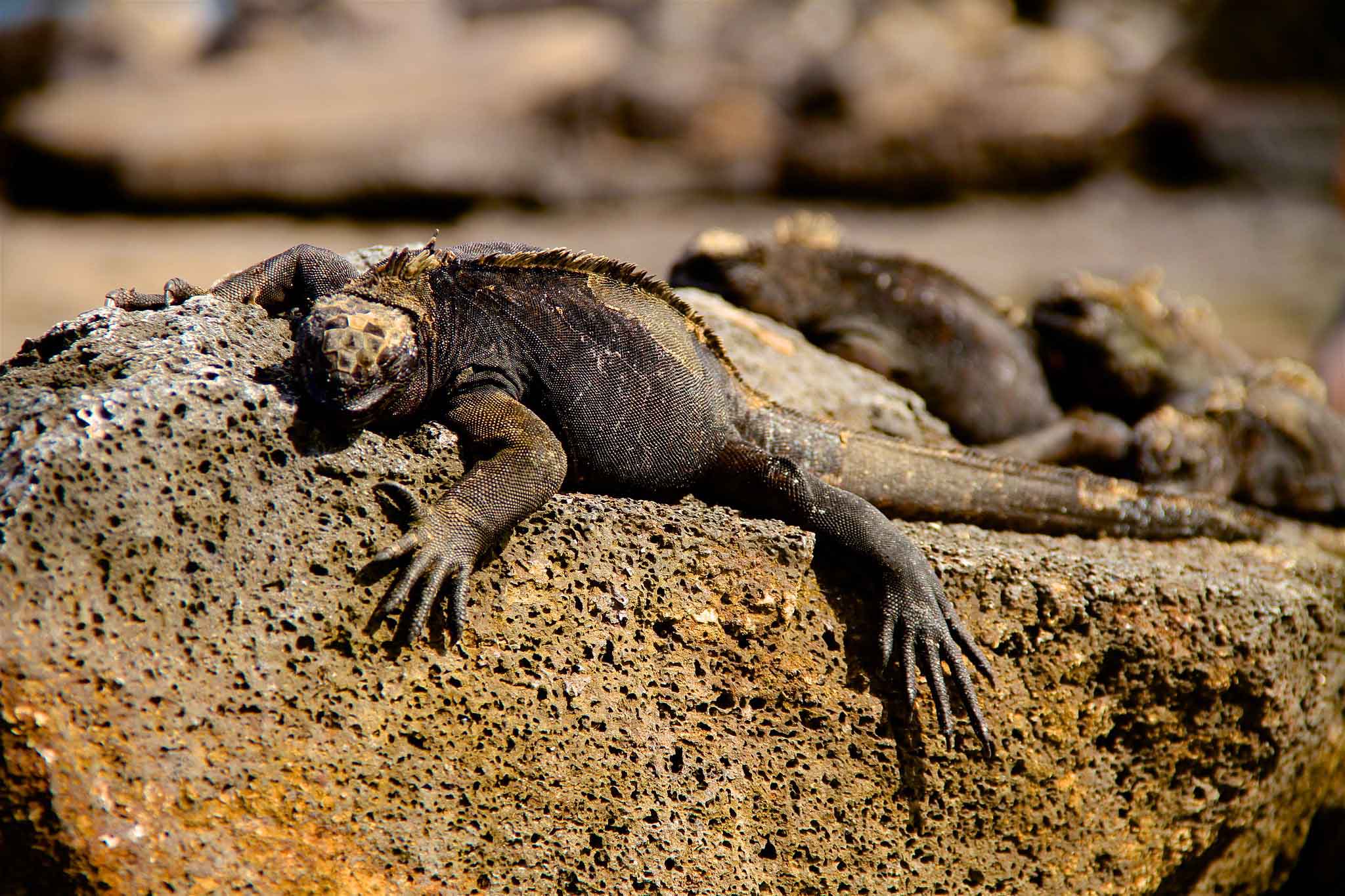 Morning: Arrival to the airport in Baltra, reception by the cruise guide and transfer to the yacht.
Afternoon:Lunch service. Visit to Charles Darwin Scientific Station and Breeding Center*. Dry landing.
*The main visit in Puerto Ayora is to Charles Darwin Station. An excellent way to begin learning about the islands, their origin and formation. You will learn about how the Galapagos turtles are raised and meet Jorge, the famous solitary turtle. The Scientific Station has its own beach that receives many visitors on weekends.
Evening: Guide briefing. Welcome cocktail. Dinner service and navigation to South Plaza.

Morning: Breakfast service. Dry landing. Visit to South Plaza. Nature walk*. Deep water snorkeling.
*Your visit to South Plaza begins with a dry landing. The rocky trail circumnavigates the island displaying the combination of dry and coastal vegetation zone. South Plaza has one of the largest populations of Land Iguanas in the Galapagos. The iguanas seem to be everywhere once you land. These larger than average yellow‐brown land iguanas feed on the fruit and pads of the prickly pear cactus. South Plaza is also home to Marine Iguanas living along the coast and a Hybrid Iguanas whose fathers are Marine Iguanas and mothers are Land Iguanas. As the walk continues along the sea cliffs Swallow‐tailed Gulls, Frigatebirds, Audubon Shearwaters, Red‐billed Tropicbirds, Brown Pelicans, Blue‐Footed and Masked Boobies are frequently seen. Beneath along the shore a colony of Bachelor Sea Lions can be seen.

Afternoon: Lunch service. Navigation to Santa Fe. Wet landing. Nature walk*. Deep water snorkeling.
*Santa Fe Island is home to one of the most beautiful coves in all the Galapagos. It is located in the southeastern part of Galapagos, 2 1/2 hours from Santa Cruz and 3 hours from San Cristobal. Santa Fe was formed from an uplift (rather than a volcano) giving the island a relatively flat surface rather than the typical conical shape of the other islands. Visits to Santa Fe begin with a panga boat ride across the lovely turquoise lagoon. Once ashore you are brought into contact with one of the many sea lion colonies in the Galapagos. Bulls compete for the right of beach master while cows lounge in the sun. It is quite a fascinating sight! The loop trail around the island leads past the salt bushes where Galapagos Hawks can be approached easily. Santa Fe is home to endemic Land Iguanas. These iguanas are the largest in the islands and they are beige to chocolate brown in color and resemble small dinosaurs. Reaching the summit there is a stunning view of the cove beneath.
Evening: Guide briefing. Dinner service and navigation to San Cristobal.

Morning: Breakfast service. Deep water snorkeling. Visit to Bartolome. Dry landing. Nature walk*.
*This desolate island with few plants is the most visited and most photographed island in the Galapagos. The island consists of an extinct volcano and a variety of red, orange, green, and glistening black volcanic formations. The best known of the island's features is the Tuff Cone known as Pinnacle Rock. This large black partially eroded lava formation was created when magma expelled from the volcano reached the sea. When the seawaters cooled the hot lava it caused an explosion. The exploded particles eventually fasten together forming a rock composed of thin layers. Bartolome's Pinnacle Rock has become one of the best recognized and most photographed sights in the islands. A prominent sight it was used as a target for US airmen during WWII. Lying beside the Pinnacle Rock are twin half-moon shaped beaches.
The northern beach is a popular snorkeling site where visitors have the opportunity to swim with fish, Sea Lions and Galapagos Penguins. Much larger animals can be found near the southern beach including stingrays, spotted eagle rays, white‐tipped sharks, and black‐tipped sharks. Little vegetation grows in this barren place. Mangroves border the beach and the small shrub Tiguilia grows in the volcanic sands. The seeds and tiny white flowers of the Chamaesycae provide food for the island's finch. These plants are common to arid regions and are able to survive in these harsh volcanic conditions.
Afternoon:Lunch service. Santiago Island. Wet landing at Chinese Hat. Nature walk*. Deep water snorkeling.
*Visit to Chinese Hat, a tiny island just off the southeast tip of Santiago. Its name describes the island's shape. Those visitors who travel to the island will find its special landscape worth the visit. Though centrally located it is one of the least visited sites in the area. National Park Service restrictions have limited the number of visitors to Chinese Hat. Multi‐day cruises with 14 passengers or less are the only ones permitted at this site. The landing is on a beautiful crescent‐shaped white sand beach, home to Sea Lions and Sally Lightfoot Crabs. The trail on Sombrero Chino's explores its volcanic origin, one of the most evident in the islands.
The lava rock is very fragile and tends to break off when people walk over it. The sharp outcroppings caused from these breaks make it necessary to wear good walking shoes. Patches of Pahoehoe Lava, cracked lava and lava tubes can be found on the island. While the path does not lead up the striking red rust sides of the Chinese Hat to the caldera, it does venture high enough on the island to offer some spectacular views of the waves crashing below. Snorkeling in the waters near Chinese Hat can create a stir; white‐tipped sharks frequent the area, as do the playful Galapagos Penguins and Sea Lions.
Evening: Guide briefing. Farewell cocktail. Dinner service and navigation to Santa Cruz Island.

Morning: Visit to Mosquera Islet*. Wet landing. Nature walk*. Breakfast service. Check out and airport departure at 8 AM.
*The Mosquera Islet is located between the islands of Baltra and North Seymour. It is a reef of rocks and coral (the result of an uprising) and a great white sand beach. Its narrowest width reaches about 160 meters and has an estimated length of 600 meters. In most of the perimeter there is base of lava rocks, as evidence of the lava uprising, except in the southwest side where the landing occurs. This island has one of the largest populations of sea lions. You can also observe several species of shorebirds. There have been occasional reports at this site of Orcas (Orcinus orca) feeding on sea lions. 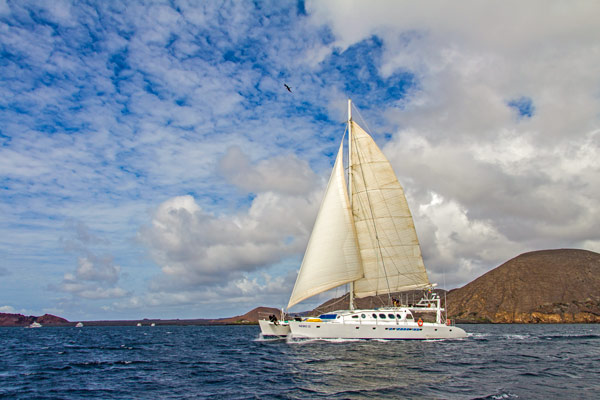